I originally published this on Facebook, but threading is terrible, so I’m putting it here to preserve some coherence. Also, slightly edited for this format. Here is the original.

The 14-day average number of daily deaths is well off its peak in the US, even though we keep seeing charts of a rebound in number of cases. This seems to have been going on for weeks, and yet the average number of daily deaths persists in its downward trend, resulting in an increasingly vocal crowd chanting that it’s not that bad, that we need to re-open everything, and that for sure schools should all be open in the Autumn. I even posted on June 29th that the 7-day average for deaths had crossed the 14-day average for deaths, and we should worry — but … the trend just kept going downwards (it turns out the spike wasn’t a cross-over, it was a blip in New Jersey data). So, if fewer and fewer people are dying from the disease, nearly two months after the early-open states got back to business, should we worry? If so, how much? 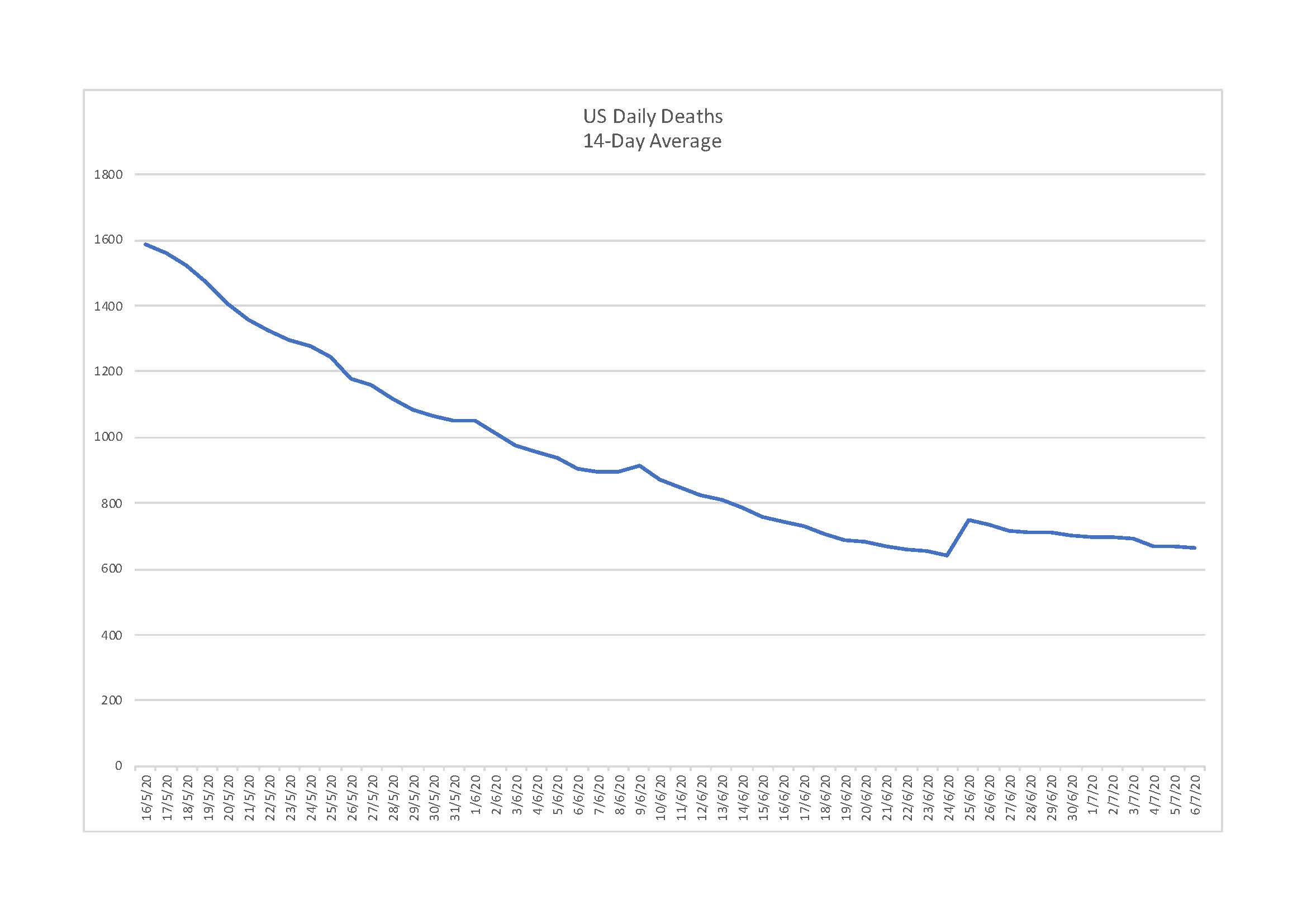 The things is, “the US” is a big place, with 50 states and a bunch of territories. If we zoom in at the state level, we see that the reason that daily deaths are falling is that there are more states on the left side of this chart than on the right. Some states are getting better and some states are getting worse, and at the moment, the better are outdoing the worse. 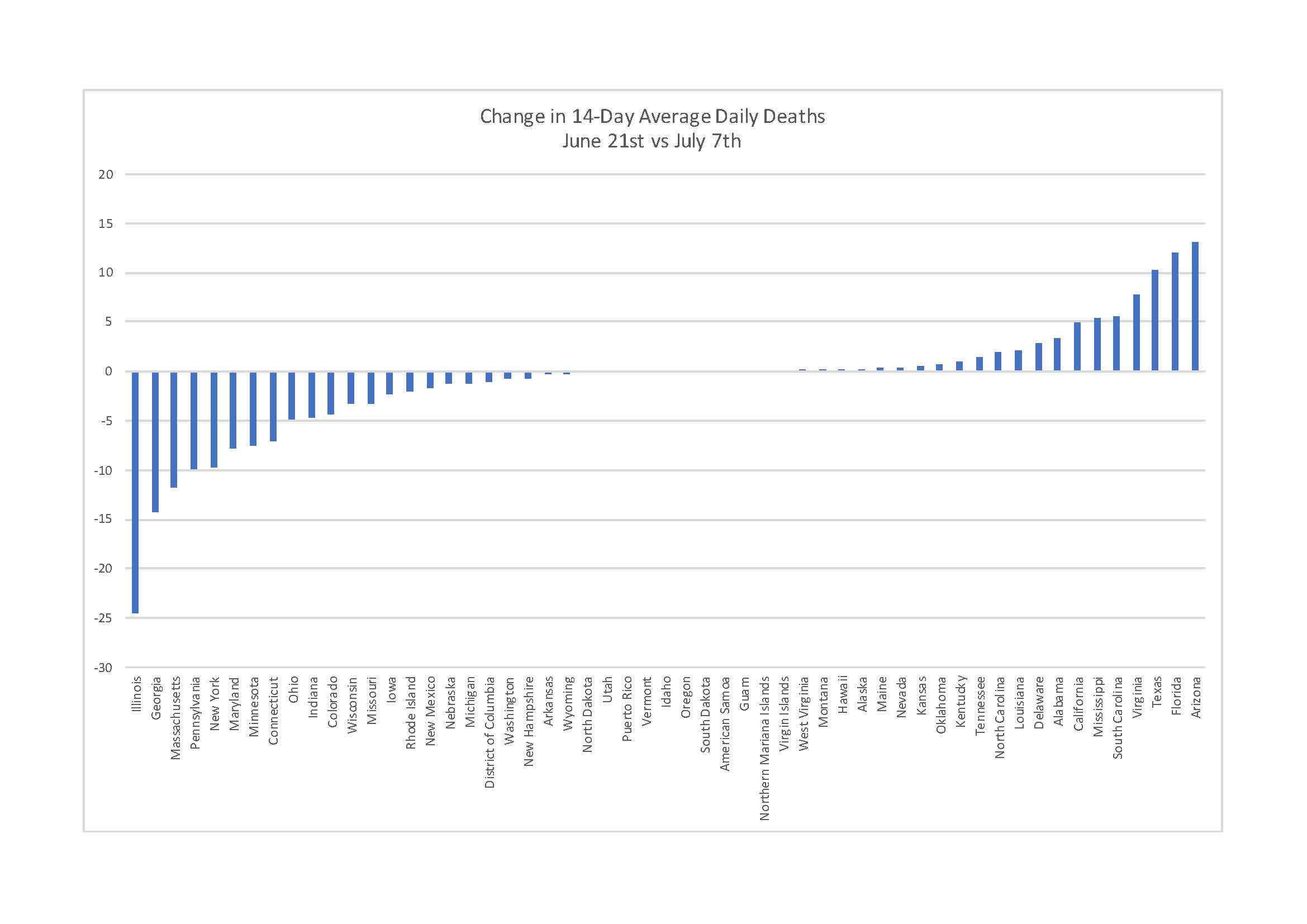 The question then becomes, what is the trend? Let’s take a look at the far right end of the last chart, and see what the trends are for the three biggest problem states: Texas, Florida, and Arizona. Here’s the change in 14-day average daily deaths for those three states. Clearly, the trend is in the wrong direction, but … honestly, it doesn’t look that bad. 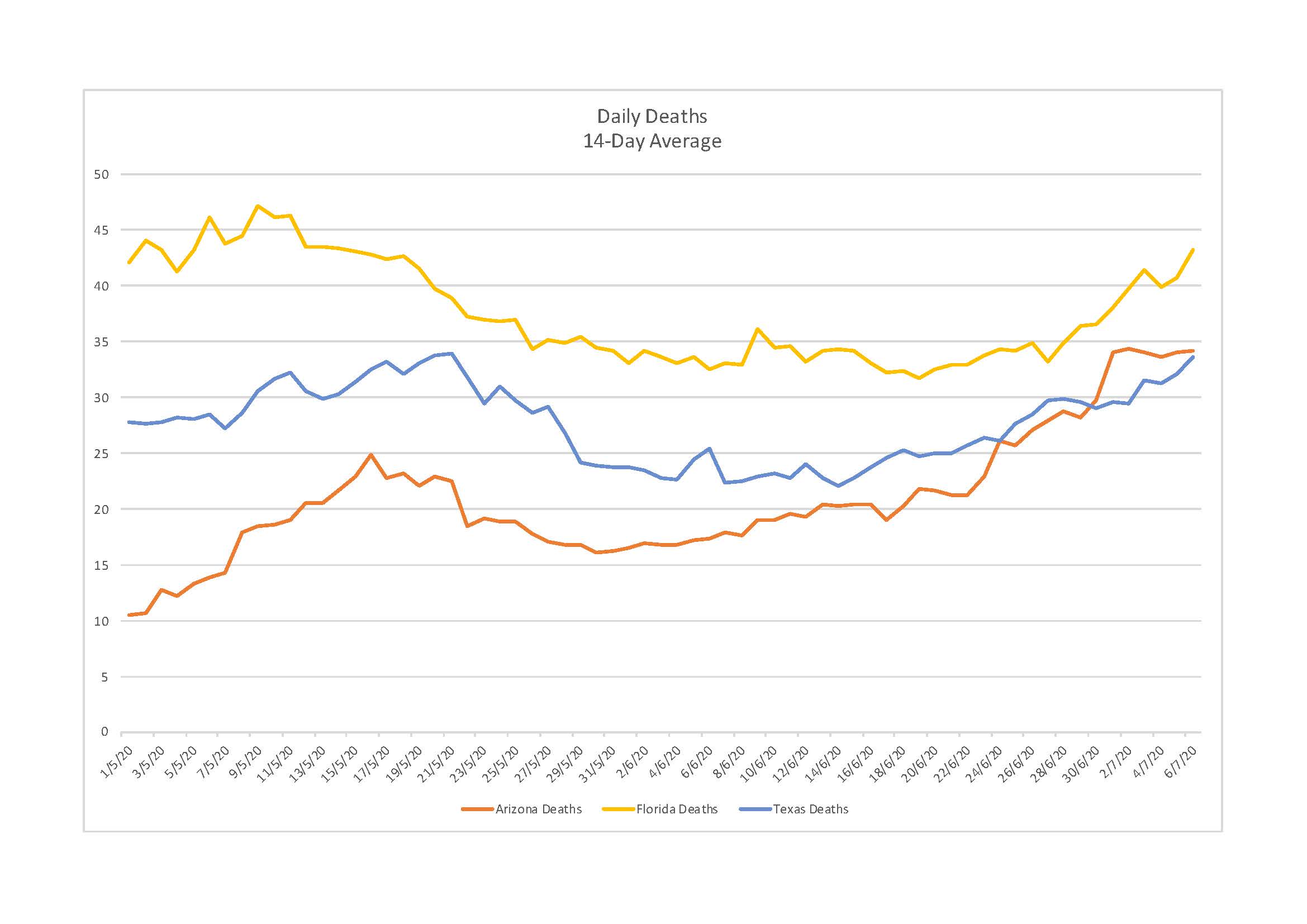 But this is when it starts to get really scary. We all know there’s a delay between new cases and hospitalizations, and then another delay in hospitalizations to deaths (or at least, there should be). So let’s take a look at each of those three states and compare 14-day average daily deaths to 14-day average new cases, over time. Here’s Texas: 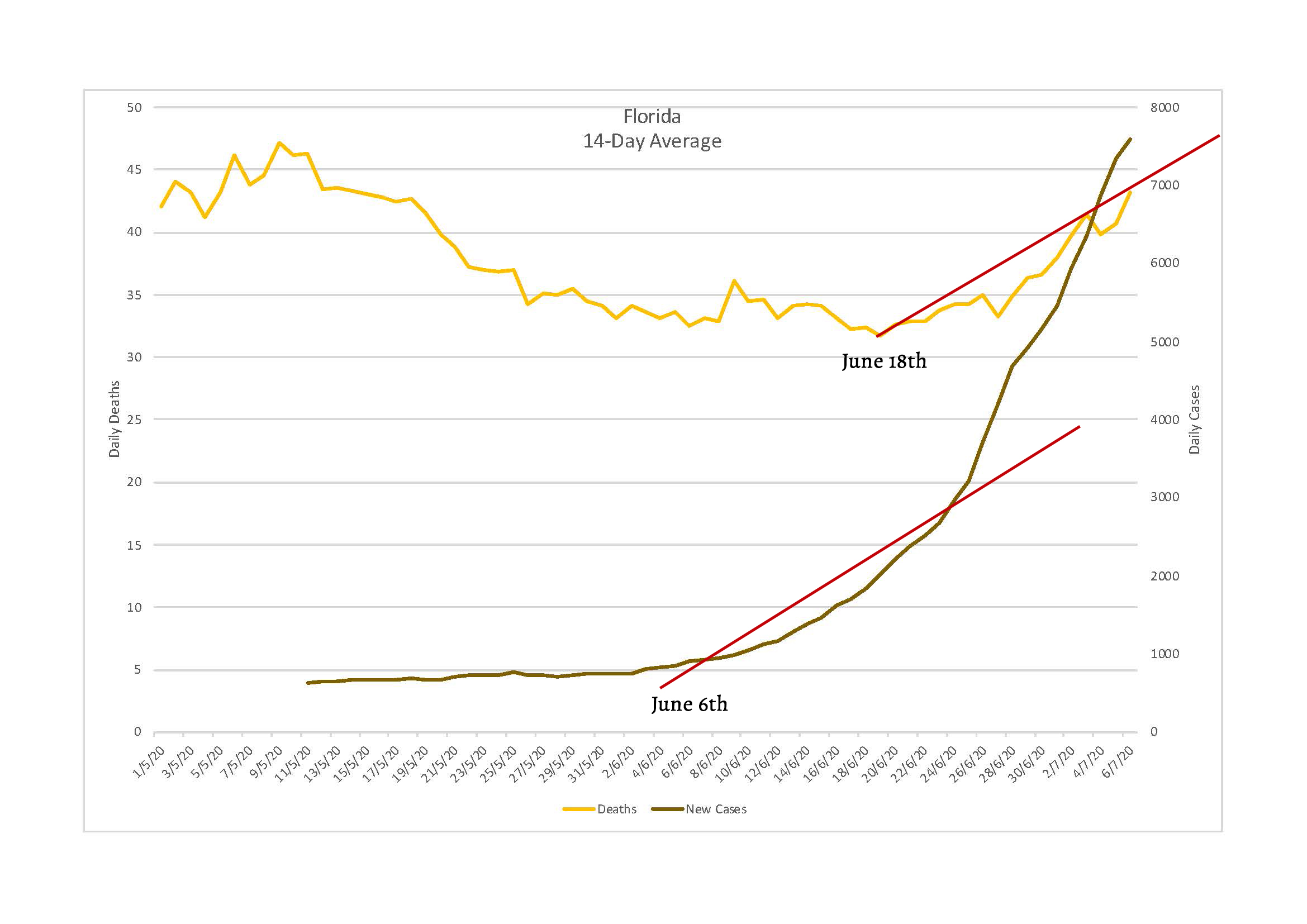 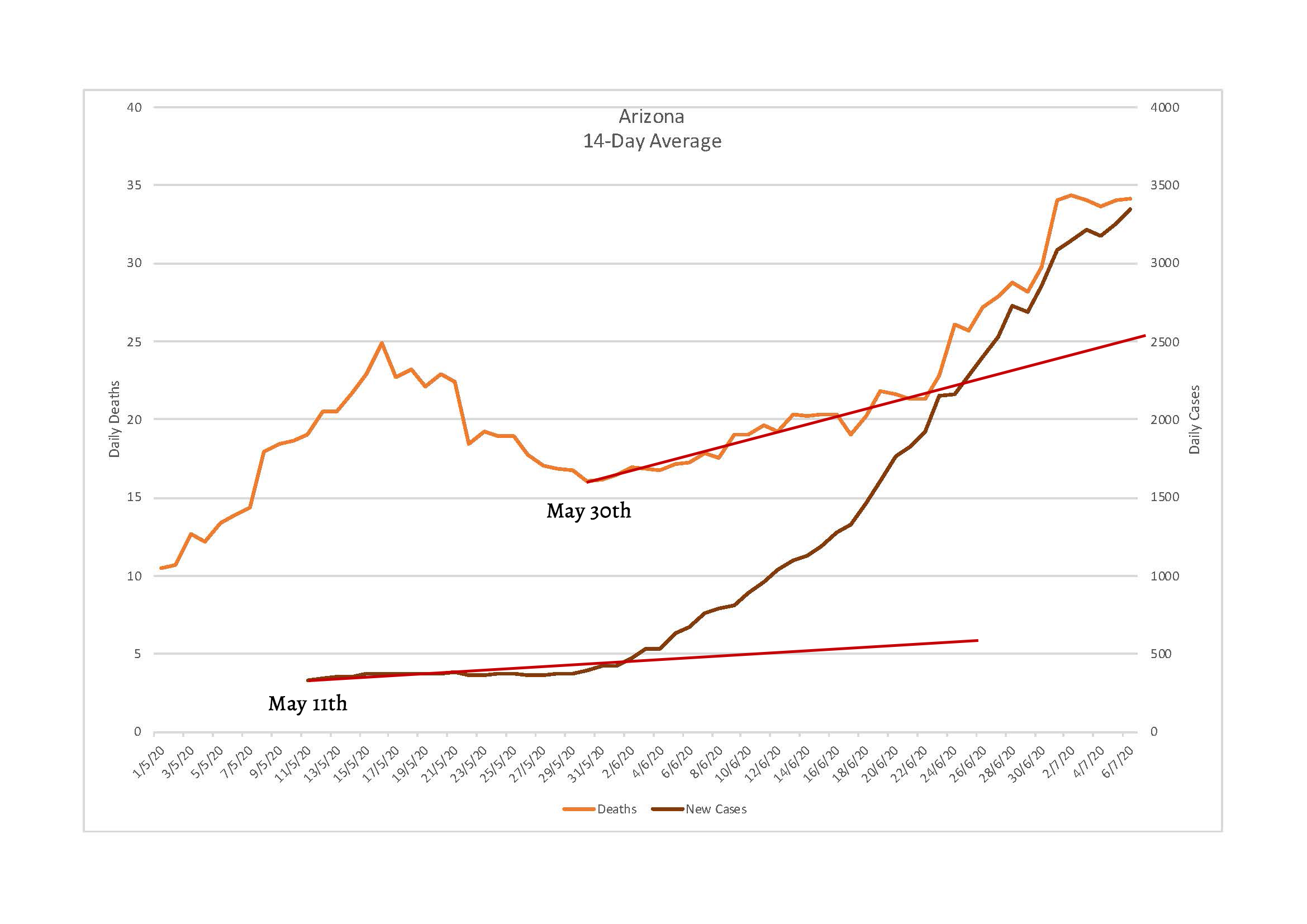 This is bad news, and not just for these states. Now, the good news is, new lockdown protocols have been implemented (e.g., in Texas). And, equally good news, there are a bunch of states at the other end, where the number of deaths (and new cases) is decreasing and apparently under control.

I really don’t know the answer, but given the number of flights that are flying full, and the fact that it will take at least a few months to work through the current issues in Florida, Texas, and Arizona, it’s very hard for me to see how the US recovers in any meaningful way before the end of the year. And then, of course, we have to worry about whether there will be a second wave when cold weather hits and everyone starts spending more time indoors. 😟